This was a big week if you own an Apple Watch and subscribe to either Spotify or Tidal. Why? Because you can finally download music and podcasts to your Apple Watch for offline listening. In other tech news, Apple changed its mind and now says that its HomePod and HomePod mini will be able to play lossless audio. There’s a new USB standard that’s going to charge your gadgets hella-fast. And Lebron seems to have worn Beats’s new wireless earbuds that haven’t been announced yet.

There were a lot of new gadgets announced this past week, too. We’ve rounded them up below.

All three new wall adapters are available for preorder and are scheduled to ship in June.

The JLab JBuds Frames are neat because they are essentially clip-speakers; they allow you to turn any pair of eyeglasses or sunglasses that you already own into a pair of audio glasses akin to Bose Frames. The kicker is that the JBuds Frames cost just $49, which is a much cheaper proposition than the Bose Frames, which can cost 3x to 4x that amount.

The Sony SRS-XB13 is the company’s smallest portable Bluetooth speaker — it’s effectively half the size of a soda can. It’s the next-generation version of the SRS-XB12, which looked identical, but the SRS-XB13 now charges via USB-C and delivers true 360-degree sound. Other than that, the SRS-XB13 is still a good portable speaker for people looking for a small and affordable option. If you’re looking for more room-filling sound, we recommend spending a little more on Sony’s SRS-XB23, which you can pick up for just below $100.

Sonos didn’t give us an entirely new speaker this week, but it did update the One SL, which is a One without built-in microphones . That said, you won’t notice the update. The refreshed One SL looks exactly the same and has the same functionality as before. Sonos gave the speaker a new wireless radio to make it more power efficient. It also removed some excess plastic from the speaker’s base to make the product more recyclable. The price of the new One SL remains the same.

The Rise Dock isn’t a MagSafe charging stand on its own. It’s a stand that requires you to own Apple’s MagSafe Charger, which Apple sells for $39, to work. That said, the weighed stand is able to house Apple’s wireless charger in such a way that it elevates your iPhone 12, which is pretty cool. Plus, its dark finish will match perfectly with anybody who has any of Apple’s space gray accessories.

Kanto launched two new sets of passive bookshelf speakers, both of which cost less than $200. There’s the YU Passive 5.25″ ($199/pair), which features a 5.25-inch Kevlar woofer and 1-inch silk dome tweeter, and the YU Passive 4″ ($159/pair), a 4-inch woofer and 1-inch silk-dome tweeter. The two sets of speakers look basically identical, other than the YU Passive 5.25″ being slightly larger, and being passive bookshelf speakers, they’re also very flexible. You can use them as desktop speakers if you a DAC/amplifier, or you can use them as TV or stereo speakers with a receiver. Available now.

This content is created and maintained by a third party, and imported onto this page to help users provide their email addresses. You may be able to find more information about this and similar content at piano.io

Fri Jun 11 , 2021
Mark B., Tech Times 10 June 2021, 09:06 am SaaS leader Glow returns with a new offering for the digital markets with its new all-in-one WordPress site maintenance tool, allowing agencies and web developers to manage multiple websites with just a single dashboard. The new WordPress solution comes after a […] 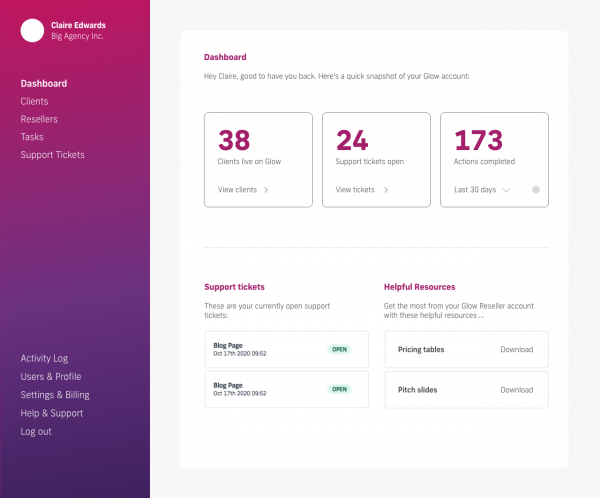