Can’t believe it’s already September? Neither can we. That said, it means we are entering the golden season for new gadget announcements. And it started this week. Below, we’ve rounded up all our favorite new tech gadgets that were announced this week, from Bose’s newest noise-canceling cans to Fujifilm’s most affordable medium-format camera yet.

Have a great Labor Day weekend!

Meze Audio announced its new flagship headphones, the Elite, which have the company’s most advanced planar magnetic drivers to date. They’ve been in the works for the last three years and take advantage of a partnership with Rinaro Isodynamics, a specialist in planar-magnetic drivers. Apparently, the Elite are supposed to produce a better, more realistic and more vibrant sound than the Empyrean, Meze’s old flagship pair of cans. Audiophiles, take note.

The Fujifilm GFX 50S II is the company newest medium-format camera — and starting at $3,999 (body only), it’s also the most affordable medium-format camera ever. In a nutshell, the GFX 50S II is essentially a less-nice version of the GFX 100S, which starts $5,999. It has a large 51.4-megapixel sensor and a similar-sized body, but it lacks the GFX 100S’s much adored phase-detect autofocus system, opting instead for a contrast-detection autofocus system. It also has a smaller and lower-mag viewfinder. (DPReview has a nice early review, for those who want to learn more.)

Bose officially the QuietComfort 45. They are the direct successors to the QuietComfort 35 II (last updated in 2017), and Bose basically updated everything about them — except the design, which remains mostly the same. The QuietComfort 45 have a new active noise cancellation system. They have an improved mic array to help with calls. And they charge via USB-C. You can preorder the QuietComfort 45 today and they’ll be available everywhere on September 23. They will come in Bose’s familiar black or white finishes.

The StayGo mini is a USB-C hub for Apple’s latest iPad Air and iPad Pro, as well as any one of its latest MacBook. It adds USB-A, HDMI (supports one 4K external display) and USB-C ports, the latter for passthrough power, as well as a dedicated headphone jack. It’s essentially a smaller and more affordable version of the company’s StayGo.

The Wyze Buds are the company’s second pair of true wireless earbuds, following the Wyze Buds Pro that were also just recently released. The non-Pro models ditch the stemmed look of their Pro siblings and adopt a more traditional earbud design. They also are $16 cheaper than the Pros, but lack their active noise-cancellation and support for wireless charging.

Jabra introduced the next-generation of its wireless earbud line. There are three new models. The Elite 3 are company’s new affordable option, costing just $79. The Elite 7 Active are the company’s newest rugged earbuds designed for runners and athletes; they’ll cost $179. And the Elite 7 Pro (pictured), which will cost $199, are the company’s new flagship option with active noise-cancellation. As for its old Elite 65t and Elite 75t earbuds, those are getting phased out.

Polaroid’s newest instant film camera, the Now+, is an updated version of the company’s Now. The “Plus” model is unique because it comes with five different physical lens filters that attach to lens and bring color and effects to the final image; there are four color filters (red, yellow, orange and blue) as well as a “startburst” filter. It also works with a companion smartphone app that allows you to adjust settings like aperture, bokeh, shutter speed and flash before you take the shot.

JBL announced several new portable speakers and wireless earbuds this week, with the standout being the new Flip 6. It’s a new and improved version of the fan-favorite Flip 5 portable speaker. It has a more rugged design (IP67 vs the Flip 5’s IPX7), some updated internals and a redesigned JBL logo on its side. It’ll be available this December.

This content is created and maintained by a third party, and imported onto this page to help users provide their email addresses. You may be able to find more information about this and similar content at piano.io

Fri Sep 3 , 2021
Image of Wonder Boys Summer 2021Some of the more than 100 Arkansas Tech football players who participated in voluntary summer workouts pose for a photo outside the Hull Physical Education Building following one of their training sessions. Legendary basketball coach John Wooden observed that the true test of a man’s […] 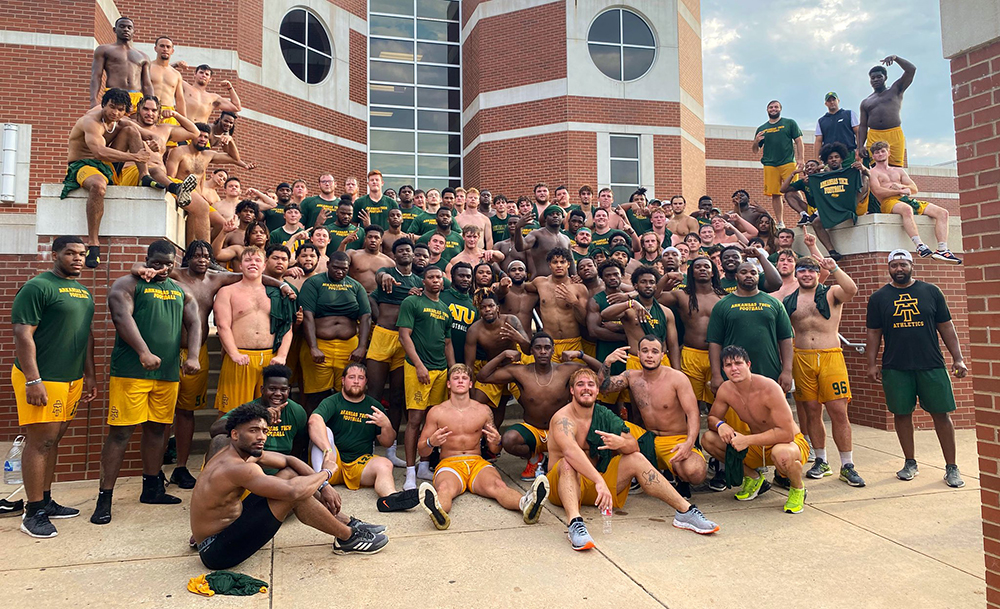