Welcome to RB’s weekly roundup of the latest in restaurant technology. To get this and other tech news sent right to your inbox every Wednesday, click here.

First, the California law that allowed them to classify their drivers as independent contractors was ruled unconstitutional by a state judge. Then, the New York City Council approved a bill that will permanently limit what delivery companies can charge restaurants. And on Friday, the city of Chicago sued DoorDash and Grubhub, accusing them of deceptive business practices.

The actions threaten just about every part of the third-party delivery business model—an intricate, three-sided system that becomes untenable if one leg of the stool is compromised. The attacks in three of the country’s largest restaurant markets means they could have wide-ranging implications for the industry.

The relationship between restaurants and delivery companies is complicated at best. Third-party providers offered a lifeline during the pandemic, and they did things intended to help restaurants, such as distributing millions of dollars in grants. But their services are expensive, and some of their tactics have created problems for restaurants.

And they are not going down without a fight. They will appeal the California ruling, which will stop any changes to the law for now. Meanwhile, DoorDash and Uber Eats have said they are working on creating similar legislation elsewhere.

In New York, the permanent fee cap is likely headed to court. Grubhub called the bill “unconstitutional” and said it plans to “vigorously fight this illegal action” in its most important market. It and DoorDash have already shown a willingness to litigate such issues—they are suing the city of San Francisco over its own permanent fee cap.

As for Chicago’s lawsuit, both Grubhub and DoorDash called the allegations “baseless.” The city laid out nine charges: three against both companies, four against Grubhub and two against DoorDash. The companies have denied all of them, and are predicting victory.

“Every single allegation is categorically wrong and we will aggressively defend our business practices,” a Grubhub spokesperson said in an email. “We look forward to responding in court and are confident we will prevail.”

Speaking of Gruhbub, the Chicago-based company unveiled a new look last week. It is adopting the orange color scheme of new parent company Just Eat Takeaway.com (JET) for both itself and its sub-brand, Seamless. The new hue is visible throughout the company’s website, app and other branding. 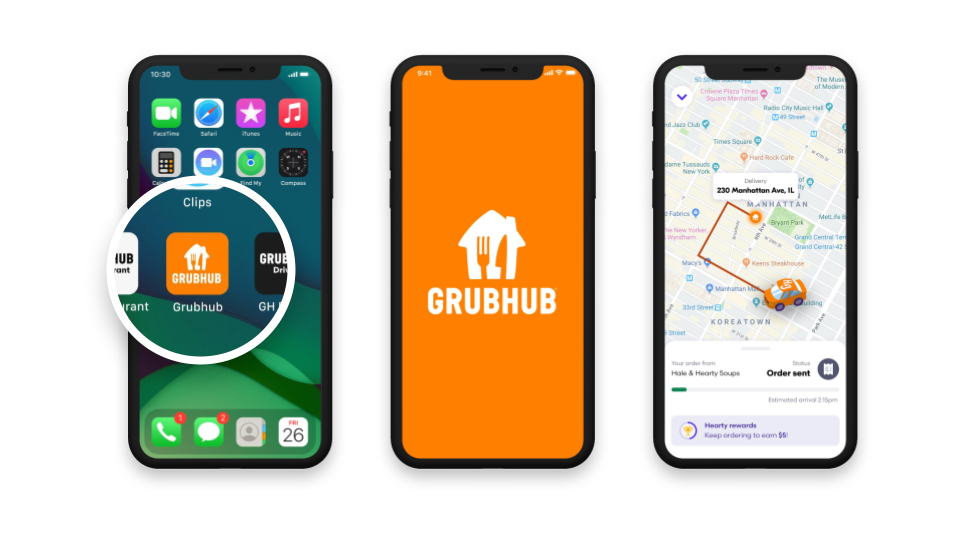 Grubhub’s new color scheme and logo on display in its mobile app. / Image courtesy of Grubhub

That is not the only change happening at Grubhub under its new owner. In recent weeks, the company has announced integrations with two large online ordering and POS companies, Olo and Clover, a move that JET CEO Jitse Groen took credit for on Twitter.

The partnerships will allow restaurants that use Olo or Clover to have Grubhub orders channeled directly into their POS systems, eliminating the need for multiple ordering tablets and making menu changes and other updates easier across platforms.

Picnic’s pizza-making robots are sold out. Less than a week after the company’s system became commercially available, it reached its limit for presale orders, it said in a news release. Because of the demand, Picnic is accelerating manufacturing so it can offer another ordering period. It did not say how many machines it sold.

Picnic’s automated system handles the job of topping pizzas and can produce up to 100 pies in an hour. The Seattle-based company received a warm welcome at the International Pizza Expo and Conference in Las Vegas earlier this month. “Within 10 minutes of the show doors opening, our booth was packed,” Picnic CEO Clayton Wood said in a statement. “We heard attendees say they wanted to purchase the system right off the show floor, and others couldn’t believe how quickly it made pizzas.” 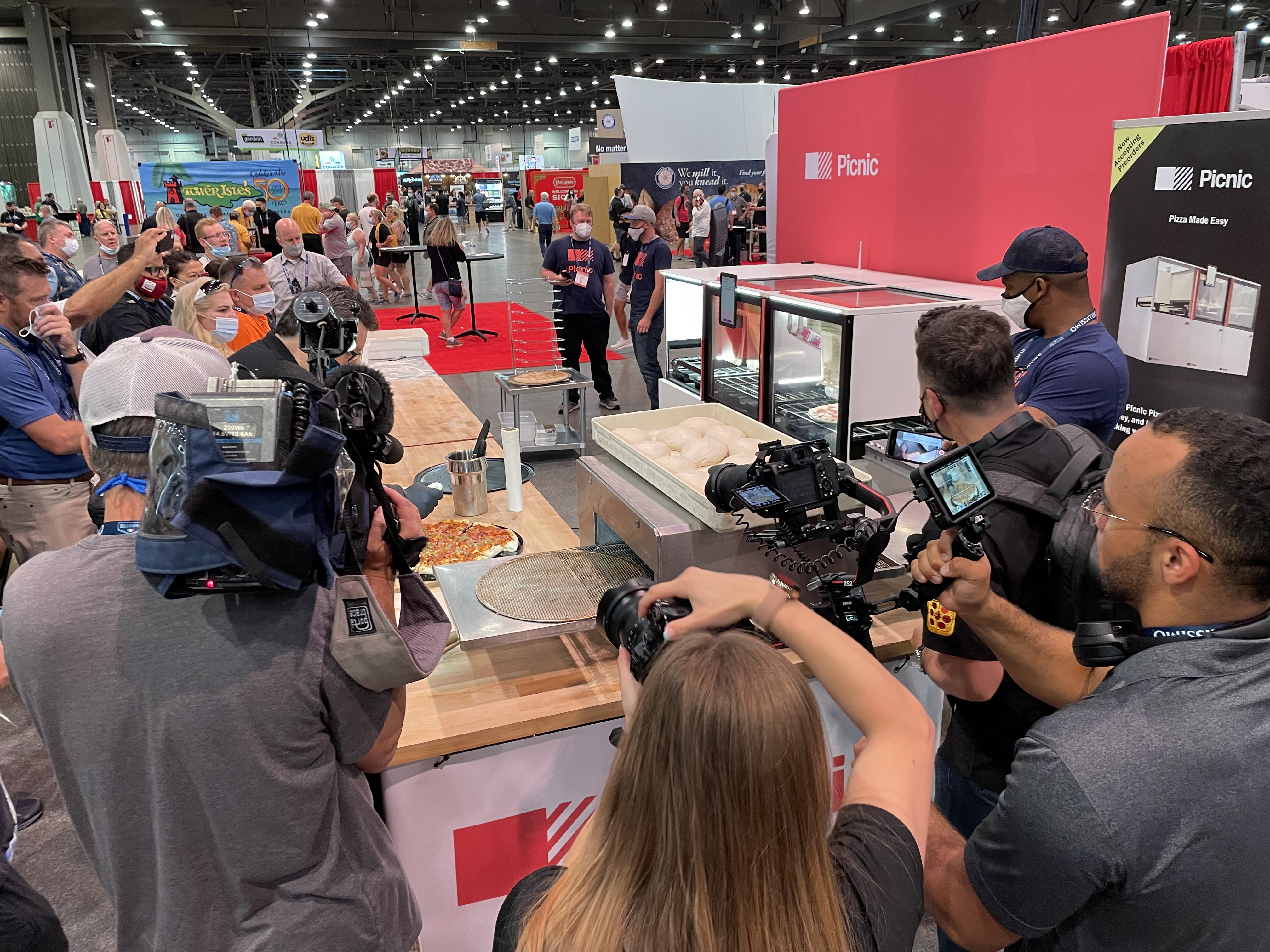 C3’s next food hall will be in a train station. The digital restaurant company is working with Brightline, a high-speed rail service that travels between Miami and West Palm Beach, to revive the former dining area inside the MiamiCentral transit hub.

The 26,000-square-foot space formerly known as Central Fare is set to reopen this fall as Citizens MiamiCentral. It will feature 16 C3 concepts including Umami Burger, Krispy Rice and Sam’s Crispy Chicken alongside some of the center’s existing brands like La Estacion and Rosetta Bakery. C3’s outlets will double as ghost kitchens for off-premise orders in the downtown Miami area.

It will be C3’s second Citizens food hall; the first is scheduled to open in Manhattan later this year.

In addition to being the main hub for Brightline, the massive MiamCentral complex has more than 800 apartments as well as retail and entertainment options.

Walmart is launching a delivery business to compete with Amazon and DoorDash. Walmart GoLocal is a white-label service that will offer other businesses the chance to tap into the retailer’s delivery network. Walmart has built a robust self-delivery operation that covers 3,000 of its stores and reaches nearly 70% of Americans.

So, will restaurants be able to use GoLocal? “It’s possible,” a representative for the company said.

“We’re constantly evaluating the needs of our customers and the communities we serve, and are open to working with many kinds of clients,” the person said in an email.

In case you missed it …

Toast filed for an IPO.

Kitchen United sees itself in “every big city in America.”

Ghost kitchens are hitting their stride.

Wed Sep 1 , 2021
The best document management software makes it easy for you to digitize, organize, secure, store, and tag your business documents. This kind of software automates your business processes, enabling your team to focus on key tasks that drive productivity.  Backed by a suite of advanced features, DocuWare is easily one […]