Nationals MP George Christensen will move from politician to publisher, launching a “pro-freedom” news website as he prepares to retire from federal Parliament.

The website, modelled on American outlet The Drudge Report, has so far been filled with links to fringe blogs and stories that are critical of COVID mask mandates and vaccinations.

One story claims a spate of US mass shootings were a “ruse” that were “co-ordinated by some evil force”.

Mr Christensen, the Member for Dawson, has said he won’t contest the next election.

However, he has told followers “I will not be leaving quietly”, and has recently come out heavily against COVID mask rules and in support of anti-lockdown protesters.

On Tuesday, he claimed “lockdowns don’t work” in a House of Representatives speech, and was officially rebuked in a rare condemnation motion by the Parliament.

But the 43-year-old Queenslander has been relatively mum on exactly what he’ll do upon leaving Parliament.

“I can potentially have a stronger, more unfiltered voice outside of our Parliament,” Mr Christensen said in May, in announcing his plans to leave federal politics.

Last month, Mr Christensen told subscribers he planned to “launch a regular YouTube show as well as a news aggregator site under the Nation First banner”.

He said those new projects would “bring you the best news and views out there that relates to the pro-freedom, patriotic and conservative agenda of this e-newsletter”.

‘For Aussie patriots and freedom lovers’

The MP has not officially launched the aggregator site, but The New Daily located a news website online – registered under Mr Christensen’s name and Australian Business Number – operating under the Nation First title.

Mr Christensen worked as a journalist, newspaper editor and publisher before entering Parliament.

TND contacted Mr Christensen’s office to confirm he was behind the Nation First website, but didn’t receive a response.

However, following TND‘s enquiries, the website was placed behind a password-protected gateway overnight on Tuesday, and is no longer publicly accessible.

Publicly available domain registration information showed the website was registered under the same ABN as Mr Christensen’s official parliamentary website. The Australian Business Register lists Mr Christensen as the owner of that ABN.

The Nation First website is officially registered to a ‘George R Christensen’.

Soundtracked by dramatic instrumental music, the video cycles between images including the Chinese flag superimposed on naval warships, a small illustrated figure pushing against a giant fist, another figure standing against a backdrop stamped multiple times with the word ‘cancelled’, billionaire financier George Soros, and the phrase ‘enough is enough’.

The video shows the website’s motto “Act for Australia”.

In previous editions of his newsletter, Mr Christensen wrote “beyond the mainstream media we discover the truth”.

The Nation First website looked very similar to The Drudge Report, a pioneer of the political blog format. As an ‘aggregator’ model, Drudge listed links to stories from other outlets, as well as publishing original stories.

Mr Christensen’s website carries a note that it is “powered by the WP-Drudge WordPress theme”, a design scheme available for the popular WordPress blogging platform.

The website carried the tagline “news and views that put Australia First”.

Of 31 links which were displayed on the website’s homepage on Tuesday, 30 are news articles from American media outlets.

The 31st was a link to a blog Mr Christensen published in January, asking former US president Donald Trump to issue a pardon to WikiLeaks founder Julian Assange and saying it would be a “blow to the deep state”.

Another article linked to on Nation First, published in April, claimed a spate of mass shootings in the US were “timed suspiciously with the new Leftists push for gun control”.

“Isn’t it blatantly obvious this is co-ordinated by some evil force? This isn’t an accident,” claims the article, published on fringe website Creative Destruction Media.

Mr Christensen has said he will not contest the next election, due by May 2022.

He claimed “politics is broken”, criticising the “mainstream media and a range of other institutions … have got their tentacles wrapped around the system and it’s very hard to get the conservative agenda moving forward”.

In recent times, as reported by Crikey, Mr Christensen has used his newsletter to promote book purchases from Amazon, through the website’s affiliate marketing program.

He later added a note to his emails, to disclose “as an Amazon Associate, I earn from qualifying purchases”.

Amazon’s affiliate marketing program offers “up to 10 per cent in associate commissions from qualifying purchases and programs”.

Thu Aug 19 , 2021
photo: hologram With no shortage of local tech innovation on the horizon, learn how these Windy City companies are changing the game for their respective industries after raising new funding last week. This is the Built In Chicago weekly refresh. Hologram raised $65M. The company develops SIM cards for IoT-connected devices, […] 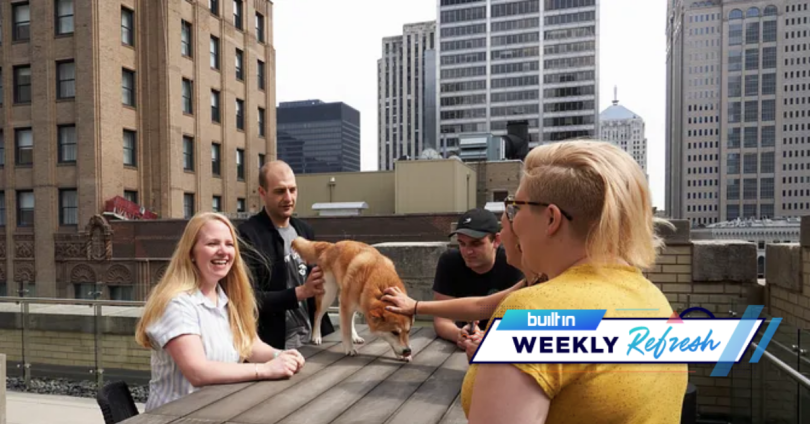