McAfee’s security software hasn’t always wowed us in the past but, since parting company with Intel in 2017, it’s become a persuasive contender.

That’s partly to do with value. Total Protection is McAfee’s top-of-the-line offering and one of the most feature-packed security suites we’ve seen, yet you can get a three-PC package on Amazon for just £15 a year. The slightly leaner Internet Security suite can also be had for two quid less.

READ NEXT: The best antivirus software for Android devices

McAfee Total Protection review: What do you get for the money?

McAfee Total Protection keeps an active watch over your system and blocks viruses and other malicious items on access. It monitors web content, too, and the free browser extension for Chrome, Edge, Firefox and Internet Explorer will steer you away from dodgy websites.

Additional features include a custom firewall and access to McAfee’s True Key password manager across five devices. There’s also an automatic software updater – a simple network scanner that lets you inspect nearby LAN clients – and tools for encrypting or shredding sensitive files. 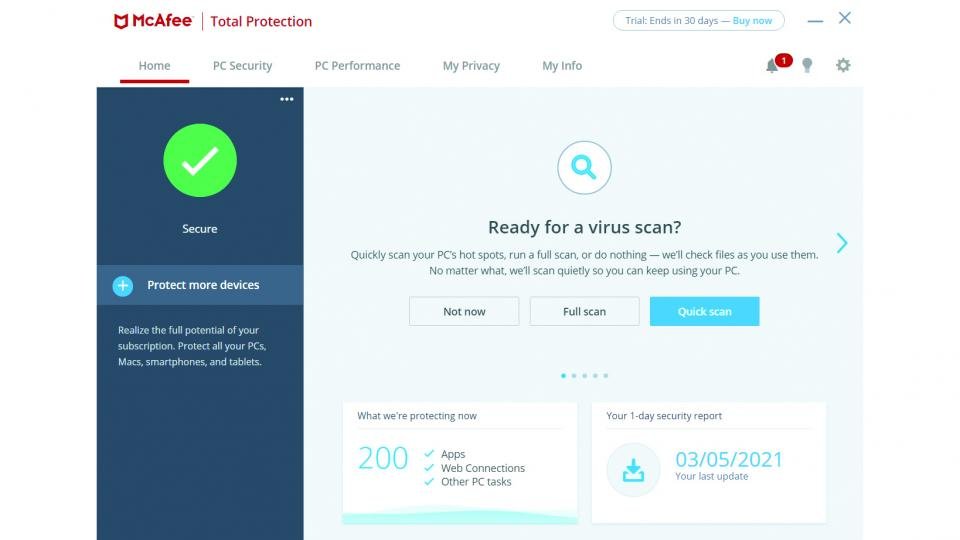 Also included is McAfee’s Safe Family parental control platform. This works across Windows, Android and iOS to track and block specific apps and online content, keep tabs on device location and even send you alerts when your kids enter or leave defined areas.

Most unusually, your McAfee subscription also includes a complete VPN service, with selectable servers in 23 locations around the world and no data caps. You can even set it to kick in automatically whenever you connect to a new network too – a very nice touch. The catch is that to use it you have to keep the automatic licence renewal option turned on. This could prove costly if you forget to cancel at the right time, as the price goes up significantly in the second year.

READ NEXT: The best antivirus you can buy

McAfee Total Protection review: Does it keep you safe?

McAfee’s malware engine is regularly put through its paces by both AV-Comparatives.org and AV-Test.org and, in the most recent tests carried out in the first half of 2021, Total Protection achieved a flawless 100% protection rating.

There’s a but, though. While McAfee successfully blocked every nasty sample it was exposed to, it also wrongly flagged seven innocent items. That’s more than we’d like to see. Once you get into the habit of manually unblocking safe items, it becomes far more likely that you’ll end up unblocking something dangerous. By contrast, in the same test, F-Secure SAFE and Eset Internet Security made no mistakes at all.

McAfee Total Protection review: What’s it like to use?

In the past, some McAfee products were burdened with a sluggish, overcomplicated front-end; thankfully, that’s now been completely overhauled. The current release of Total Protection is nicely responsive and neatly organised, with tabs along the top and sensibly labelled controls in the main pane.

It’s also one of the nimblest security suites around. In a range of different usage scenarios, AV-Comparatives.org and AV-Test.org reported it slowed down their test PCs by an average of 6.3%. That’s an excellent score; of the packages we’ve reviewed, only F-Secure SAFE did better, nosing ahead with 6.1%. Windows Defender meanwhile weighed in at a ponderous 12.5%.

Scanning is quite quick, too. McAfee Total Protection fully scanned an external hard disk containing 55GB of assorted data in well under two minutes. Again, it didn’t quite keep up with F-Secure SAFE, which whizzed through the test in 27 seconds, but many other suites took longer and Windows’ own scanner left us waiting around nearly ten minutes.

McAfee Total Protection review: Should I buy it?

McAfee Total Protection partners slick and effective malware protection with a tempting array of genuinely useful add-ons. The fact that it can be had for such a low price makes it almost irresistible.

However, a worse than average false positive rate means you might need to be prepared to fish the odd file out of quarantine and, if you’re going to enable the VPN, make sure you set a reminder to cancel your subscription before you’re stung with a hefty renewal fee.