When news broke that breakout star Regé-Jean Page was leaving Bridgerton after only one season, my initial reaction was that of shock and heartbreak. I couldn’t fathom why Netflix and The Duke of Hastings weren’t able to come to some sort of agreement. But then it hit me: my entire career, I’ve watched talented engineers leave companies for greener pastures after painfully short tenures. I’m even guilty of this myself — I left an amazing company after less than two years to join Ethena as VP of Engineering.

My example aside, I think the larger phenomena is a problem with organizations, not individuals. When hiring someone new, companies are forced to play in the open market, competing for top talent. But internally, they create opaque and informationally asymmetric compensation structures designed to minimize growth for existing employees to save the company’s bottom line. That’s not the type of company I want to be a part of, so at Ethena, I’m working to create career paths and compensation structures that encourage long and happy tenures by paying our engineers generously and in proportion to their impact. Additionally, I’ll be working with our not yet hired Head of People to publish our compensation formula publically.

Let’s break down why this strategy makes sense, and why I believe it will be fundamental to Ethena Engineering’s long term success.

With a market this hot, software developers are hopping between companies and raking in enormous pay raises in the process. But let’s think like economists for a second — in a perfect market, this shouldn’t be possible! If a developer of a certain caliber is able to demand a given salary on the open market, why isn’t their existing company paying them that very same amount? In our imperfect world, engineers join a company at a certain level of expertise, spend time learning and growing that expertise within that company, and then for whatever reason find that it’s much easier to get recognition for that growth outside that company.

A graph or two might help illustrate the problem. First, market salary increases with years of experience, assuming an engineer is improving their skills of course!

That one is a bit obvious, huh? Okay, well, let’s look at an engineer’s salary in their job at Acme Corp. Notice the slope of the line is a bit less . . . exciting? In my opinion, it’s likely the short-sighted desire to save money that defines the slope of this line at many companies.

Well, if we’re talking about compensation over time, what about impact? Check out this steep angle!

See, developers don’t just improve their transferable skills while working at their company, they gain domain knowledge that is specific to that company, and that stuff is incredibly valuable. The wild thing is that it’s only valuable to that one company! Let’s put it all together in one graph, and please don’t judge my blending of the units here . . .

The hard truth that many companies struggle to wrap their heads around is that they should be paying their long-tenured engineers above market rate. This is because an engineer that’s been working at a company for a long time will be more impactful specifically at that company than at any other company. Bridgerton casting aside, a company like Netflix understands this, and will always outbid competition for their top talent.

It’s easy to say “pay your developers more,” but it’s never that simple. For one thing, this type of compensation structure is unrealistic for very early stage startups where paying your first few engineers a market salary is usually impossible. Additionally, without an HR infrastructure in place, simplicity and equality can help early stage companies thrive. This is why, so far at Ethena, the entire engineering team, including myself, has made the same salary. The other challenge with a compensation strategy like I’m proposing is measuring everyone’s unique impact accurately and without bias. What happens when the new hotshot junior engineer suddenly starts outperforming the old guard? With an impact-based compensation structure, she would deserve a sizeable raise, but is the company willing to go through with it and risk upsetting the other team members? Plus, not all engineers necessarily increase their level of impact over time. How are these engineers, who still add value every day, compensated in this type of structure? I believe the key to navigating these hard problems is organizational maturity. At Ethena, our track record of transparency, open feedback channels and an experienced management team put us in a position to make these types of bold policies that other companies may struggle to operationalize.

With the help of our soon to be Head of People, we intend to create a formula that takes into account title, years of tenure, and performance to create a compensation graph that scales with company impact as closely as possible. By making it predictable and public, both existing team members and potential hires can know in advance what they should expect to make at Ethena in the short- and long-term. It also means being comfortable with hard truths — not everyone’s impact grows in the same way and at the same time scale and maintaining talent density means being willing to part ways with underperformers. At the end of the day, if any engineer at Ethena demonstrates they are performing at a certain level, regardless of how many years of experience they have in or outside of the company, they should be rewarded with a title and base salary that matches their impact (in addition to their tenure and performance multipliers!).

So stay tuned for more! I hope the future Head of People knows what they’ll be getting themselves into . . .

The Parallel-Parking Job That Ignited the Internet

Thu Aug 5 , 2021
As pictured on Moskowitz’s Twitter. Photo: Courtesy of P.E. Moskowitz When I was a kid growing up in lower Manhattan, my father would always tell us, “The parking gods are on our side.” Circling the blocks around our apartment after running an errand, he never failed to find a spot […] 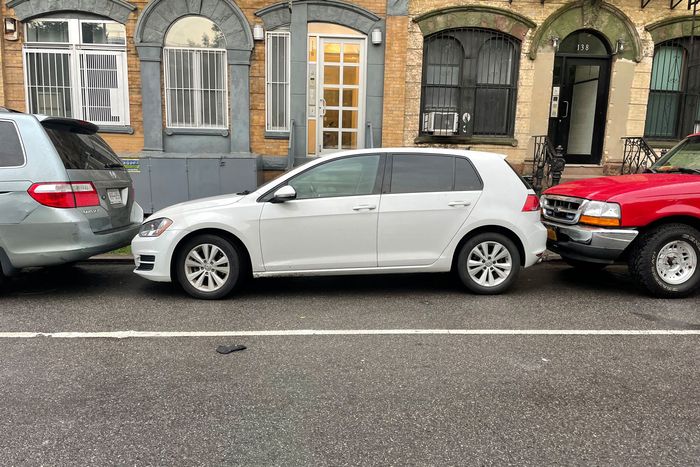